The FTSE has climbed over 1.5 percent this morning after a sharp dip at the start of the week. Markets globally have had a volatile week with fears of military conflict in Ukraine spooking investors. On Monday the FTSE hit a month low while Eurozone markets fell to their lowest point since October last year. Today’s rebound in the City of London has seen travel stocks emerge as a major driver.

British Airways operator AIG soared over seven percent this morning while easyJet is up over 4.5 percent.

Rolls-Royce, which is a major provider of manufacturing to the aviation industry, also saw its share price bounce just over three percent.

Travel has been boosted by more relaxed travel restrictions announced this week with fully vaccinated people arriving in the UK no longer being required to take a Covid test.

Airline Jet2 welcomed the move as a “game-changer” and has already reported a 30 percent surge in bookings on last week.

As well as the strength of aviation stocks in its mix the FTSE has also benefited from a lack of dominance of big tech stocks which are currently dragging down US markets amid a global sell-off.

AJ Bell Investment Director Russ Mould explained: “For years this under-representation for tech held the FTSE 100 back, now the dominance of relatively cheap tobacco, resources and banking stocks is playing in its favour.

“For the year to date it is up slightly while the Nasdaq in the US is down double digits.”

Despite the FTSE’s current rally, concerns over the situation between Russia and Ukraine stand to be a major challenge to markets.

Mr Mould warned that investors “could be forgiven” for worrying about the movements of Russian troops.

He explained: “Anything that jeopardises energy supplies and further hikes in oil and gas prices are likely go down as badly with investors as they would with consumers, owing to memories of the 1973 and 1979 oil price shocks and the economic damage they did.

“This may explain why the US is reportedly in talks with key geopolitical partners so it can help to provide them with the energy they need, in the event of any disruption to supply from Eastern Europe.”

Speaking to GB News this morning Guy Foster, Chief strategist at wealth management fund Brewin Dolphin explained Ukraine was one thing markets were “nervous” about, with the impact on energy prices also spilling over into inflation, another major market concern currently.

The EU in particular has gained a major dependence on Russia for its energy with nearly 40 percent of natural gas being imported from the country, a situation set to get worse once Norway’s gas extraction peaks in the coming years.

Christopher Dembik, Head of Macro Analysis at Saxo Bank, warned Europe would remain “a political dwarf” and be left at the mercy of the Russian president.

Financially he predicted the situation would leave Eurozone inflation “uncomfortably high on average this year” with the increased risk of a crunch on energy next year as well.

Previous Unite on Royal Mail job cuts: We are appalled with the announcement
Next Royal Mail axes jobs as COVID bites 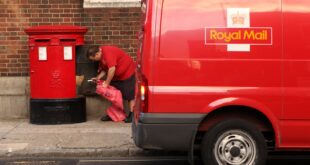