New rail strike in UK due to loss of purchasing power 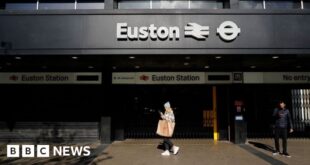 A strike by train drivers this Saturday has severely disrupted rail transport in the UK, where protests are mounting in response to rising inflation and the resulting loss of purchasing power.

Some routes, such as the Heathrow Express, which takes passengers to London’s major airport, have stopped altogether.

In a statement, Aslef defended the strike as a “last resort” after companies and the government refused to grant the wage increases demanded by workers.

The union described the situation as “unacceptable” as train drivers have not received a pay rise in three years, with inflation now above 9% and, according to the Bank of England, set to exceed 13% by the end of the year.

Operators say they are willing to offer raises, but in exchange for reforming rail workers’ conditions, the government is calling for restraint and arguing that massive public aid has already been provided to keep operators afloat during coronavirus lockdowns.

Given the sharp fall in purchasing power, other strikes are planned in the coming days and weeks at London Underground, postal group Royal Mail, telecoms operator BT and the newsroom of daily publisher Reach Group. Mirror and Daily Express tabs.

In June, British Railways had already staged a historic strike, followed by regular strikes, with two planned for the following week.