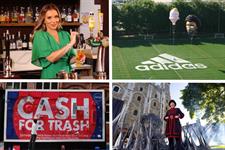 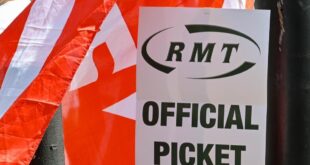 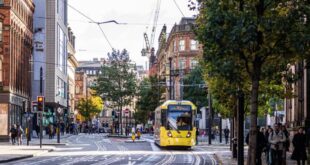 Royal Mail staff have voted overwhelming to strike at 1,000 delivery offices over plans to sack and redeploy delivery managers.

Managers at the postal service decided to back walkouts by 86% in Great Britain and 89% in Northern Ireland which will affect 2,400 staff.

Unite said it would announce strike dates in the coming days and called for a return to negotiations to avoid disruption caused by Royal Mail managers striking.

In a separate ploy, the Communication Workers Union (CWU) is also looking to hold ‘the biggest strike’ action of 115,000 postal workers if its approved by members next month.

The news comes as more train staff on Avanti West Coast voted for strike action along with BA workers at airports.

Unite general secretary Sharon Graham said: ‘It is no surprise at all that these workers have voted overwhelmingly for industrial action.

‘Make no mistake, Royal Mail is awash with cash – there is no need whatsoever to sack workers, drive down pay or pursue this ill-thought-out redeployment programme.

‘These plans are all about boardroom greed and profiteering and nothing whatsoever to do with securing this vital public service.

‘Shareholders have been seizing the Royal Mail profits, while our members have been holding the service together. Enough is enough.

‘Our Royal Mail members are guaranteed Unite’s 100% support in any industrial action they take this summer to get the company off this ruinous path.’ 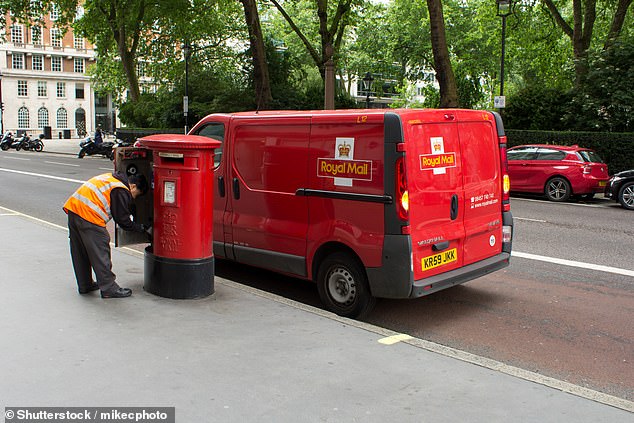 Managers at the postal service decided to back walkouts by 86% in Great Britain and 89% in Northern Ireland which will affect 2,400 managers (stock of Royal Mail worker)

‘Unite have stated they will be informing us in due course in relation to the terms of any industrial action.

‘Throughout the ballot process, Unite head office has misled members about additional job losses. This is not true. Unite has ignored our request to correct these claims.

‘There are no grounds for industrial action. The extended consultation on these changes concluded earlier this year, and the restructuring is complete.

‘We committed to protecting pay for all managers who stay with Royal Mail, and the vast majority will see an increase in their earnings.

‘We allowed managers to request voluntary redundancy with a package of up to two years’ salary, which was over-subscribed. We also made several concessions during the process, which Unite declined.

‘The ballot covers around a third of our 6,000 managers and we have contingency plans in place to keep letters and parcels moving in the event of a strike.’ 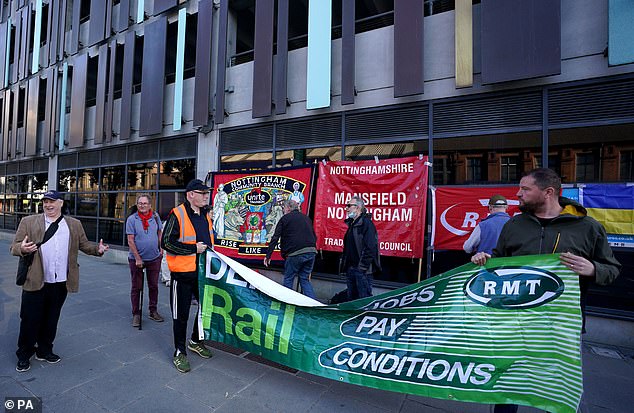 Striking rail staff form a picket at Nottingham Train Station last week, as members of the Rail, Maritime and Transport union begin their nationwide strike in a bitter dispute over pay, jobs and conditions

The Transport Salaried Staffs’ Association (TSSA) – who work at stations along the West Coast Mainline – said its members at Avanti West Coast voted overwhelmingly for strikes and action short of a strike today.

They voted by 86% in favour of striking on a turnout of 66% and by 91% for other forms of industrial action.

TSSA general secretary, Manuel Cortes said: ‘The overwhelming votes among station staff for strike action and action short of a strike demonstrate that our members are determined to fight for their pay, jobs and conditions.

‘They are right to do so amid the escalating cost of living crisis and with a government hell bent on making swingeing cuts to our rail network.’

The union is also balloting members at Network Rail and several train companies across England.

A spokesperson for Avanti West Coast said: ‘We’re disappointed the TSSA union called this ballot, which we think is premature, and we remain open to talks with them.

‘The industry is focussed on securing a thriving future for rail which adapts to new travel patterns and takes no more than its fair share from taxpayers.

‘The impact of any TSSA action will be extremely limited and we do not expect our services to be materially affected.’